The H. Bruce T. Hillyer Award is awarded to an individual who exemplifies the spirit of OTLA in fearlessly advancing the cause of individual rights by the effective use of trial advocacy.

The John A. McLeish Award shall be awarded to the person, association or group which has made an outstanding contribution to the goals of a fair trial and access to justice, as an advocate, in legal scholarship, continuing legal education, legal writing, journalism, politics or government.

The Dean Edgell Award is awarded to a lawyer who has promoted the goals of OTLA through significant contribution and excellence in legal writing, continuing legal education, and leadership activities.

The Martin Wunder, Q.C. Outstanding New Lawyer Award is awarded to an OTLA member in recognition of exceptional commitment to and promotion of the advancement of OTLA’s Mission: To fearlessly champion through the pursuit of the highest standards of advocacy the cause of those who have suffered injury or injustice. Candidates must have practiced law for less than 10 years and be nominated by an OTLA Member in good standing. The successful recipient will have demonstrated participation in activities and programs to improve our legal system and its responsiveness to those for whom we advocate. The individual will have displayed professional proficiency, undertaken trials, service to the profession and service to the community. 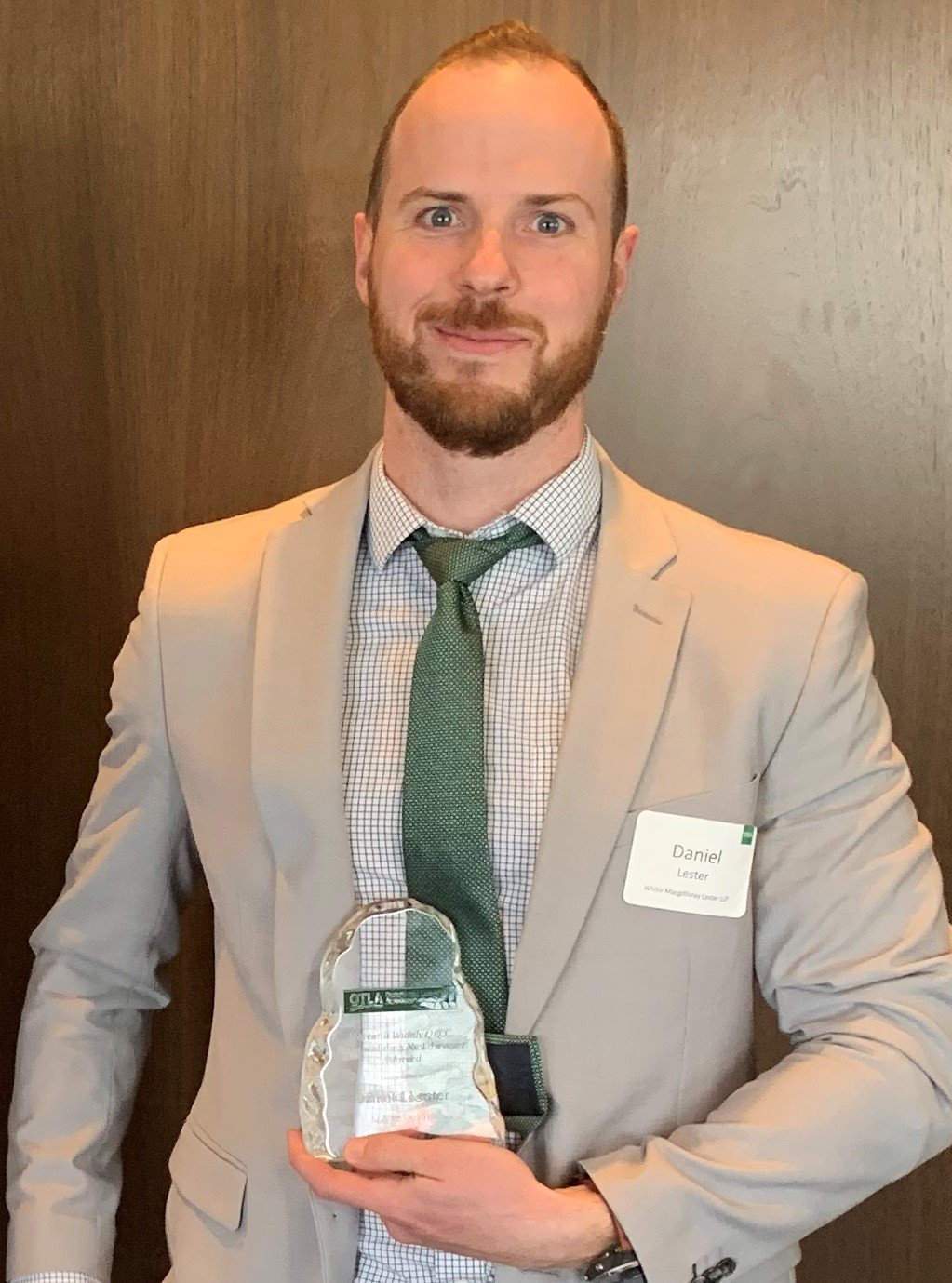 Dan Lester, White Macgillivray Lester LLP
Dan Lester was Called to the Bar in 2012 and has been an OTLA member since 2013.  He is a key partner in OTLA’s Helmets on Kids program in Thunder Bay.
Dan is a lawyer who takes difficult, tragic cases to court.
In Veneruzzo v. Storey, Dan acted for the family of a teenage girl who was killed in motor vehicle accident. The defendant was an off-duty police officer. At around the same time as the tort action resolved, the defendant made slanderous posts about the deceased on Facebook. Dan then brought a libel/slander action against the defendant. That action went to summary judgment and then to the Court of Appeal as part of the group of cases dealing with the anti-SLAPP legislation. Dan was successful before a 5 judge panel at the Court of Appeal.
Dan takes cases all over northern Ontario. He travels across northern Ontario, including flying into remote First Nations communities to help assess his clients in their communities. He has even brought OTs up to remote communities.
Dan's work on behalf of his clients demonstrates the best of what OTLA stands for.

The Distinguished Service Award shall be awarded for long standing dedicated service to furthering the goals and ideals of the Ontario Trial Lawyers Association. 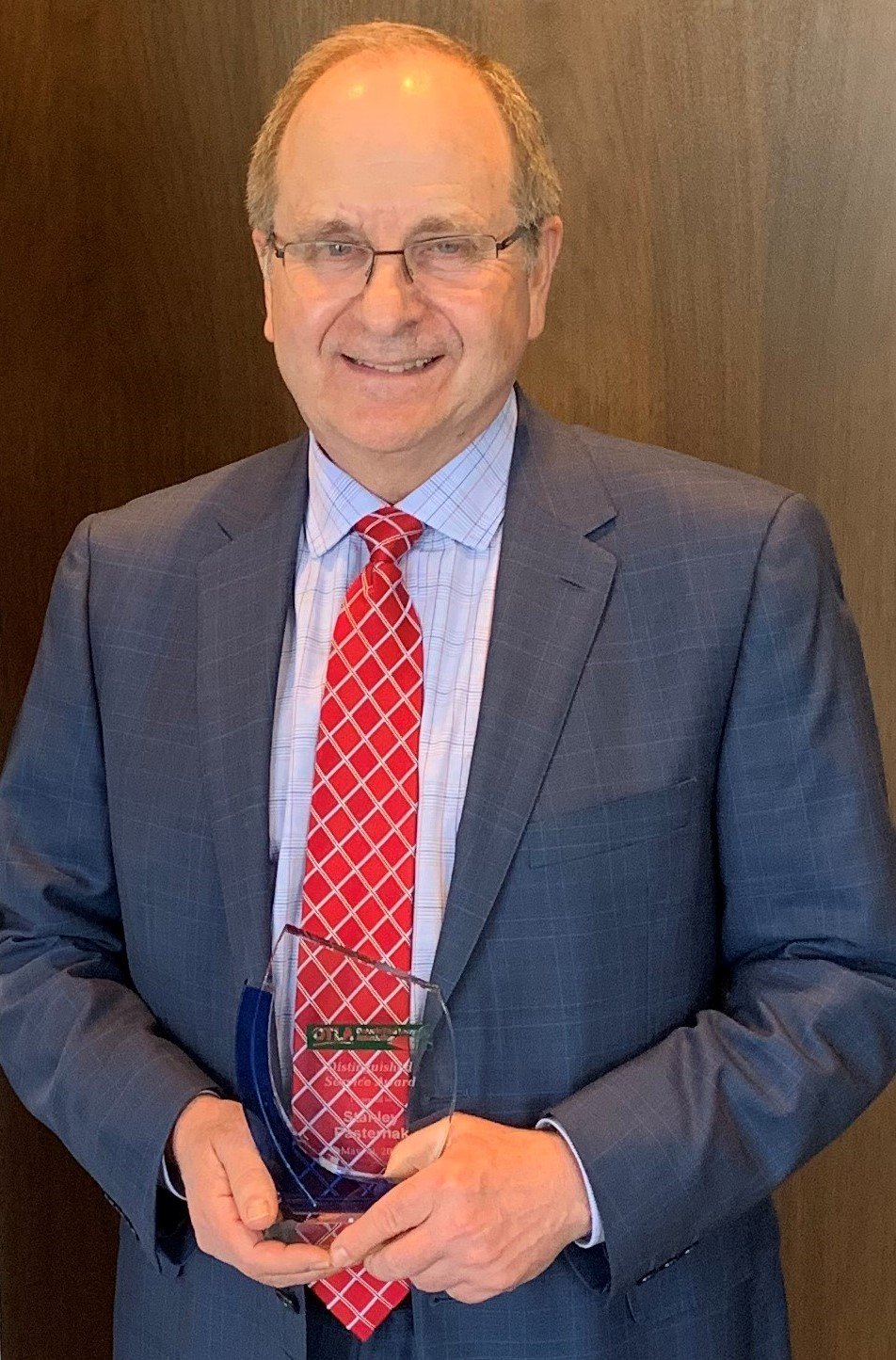 Being an OTLA Board member since 2010 and being active on committees such as Finance, Insurance, Practice Direction and the Auto Insurance Reform Working Group.

He also took a lead role in our discussions with the ministry of transportation on the redacting of accident reports.

Stanley, you have given selflessly of your time and we thank you for your commitment to OTLA and your many years of involvement. 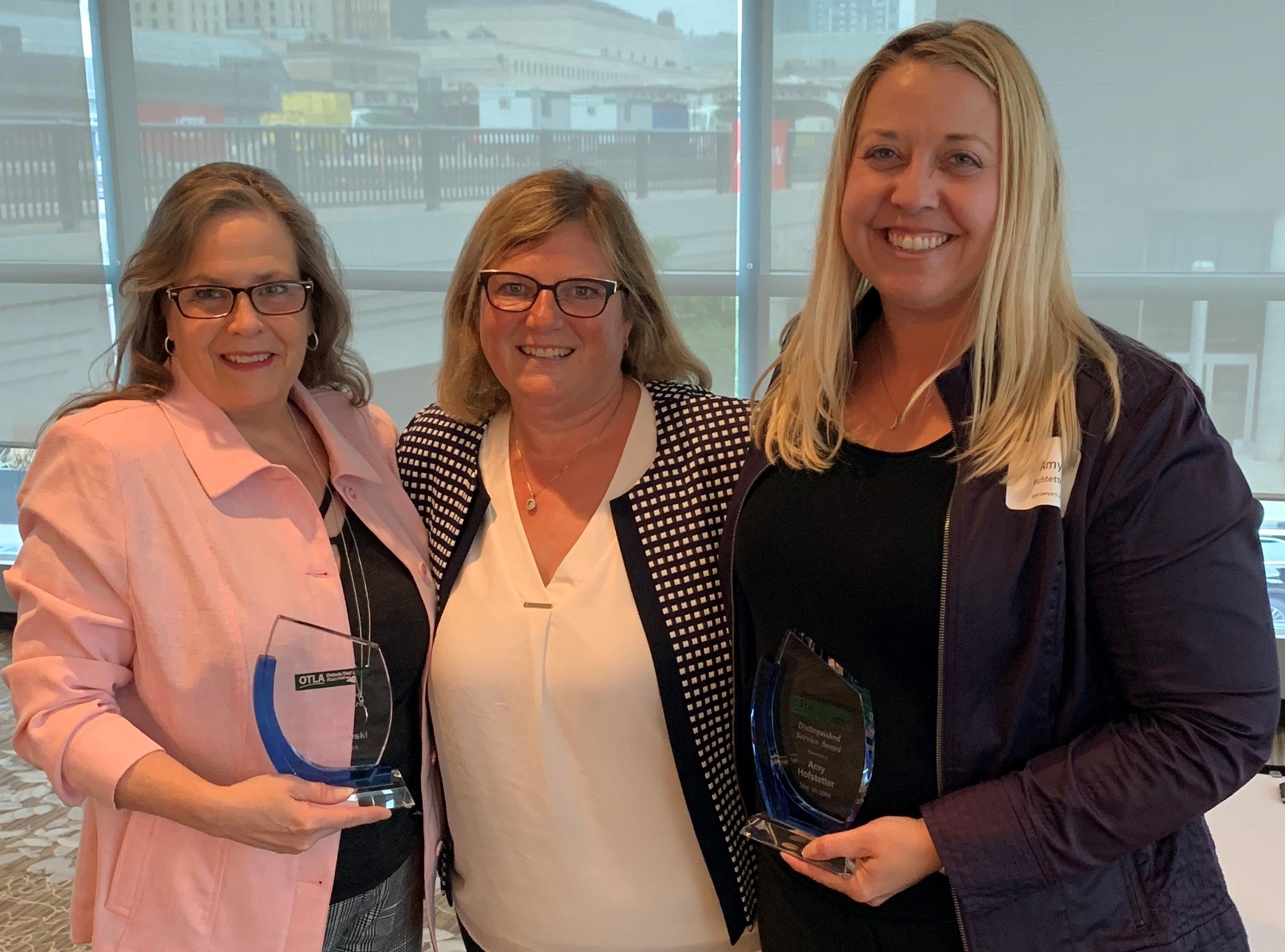 Together Amy Hofstetter and Tracy Romanowski have actively raised issues of concern across the province to OTLA.  Most recently they alerted us to the matter of many insurance companies reducing benefits to claimants by including the HST within the benefit limits.  This was contrary to several written directions given by the Financial Services Commission of Ontario, known as FSCO.  With their help and documentation, OTLA has made several requests for change and the issue was covered in the Toronto Star.  While most insurance companies are now in compliance there is still a Class Action suit going on about this matter.

We thank Amy and Tracy for their distinguished service in ‘breaking open’ this important issue on behalf of all the clients who deserve better treatment.

The Women’s Caucus Award is awarded to a female lawyer in OTLA who has demonstrated leadership in OTLA, promoted the retention and advancement of women in law, mentored other women and supported other female lawyers in OTLA.

The Distinguished Law Clerk Award shall be awarded to a senior law clerk, with at least 5 years membership in the OTLA Law Clerks Section, who has consistently exemplified the mission of the organization. 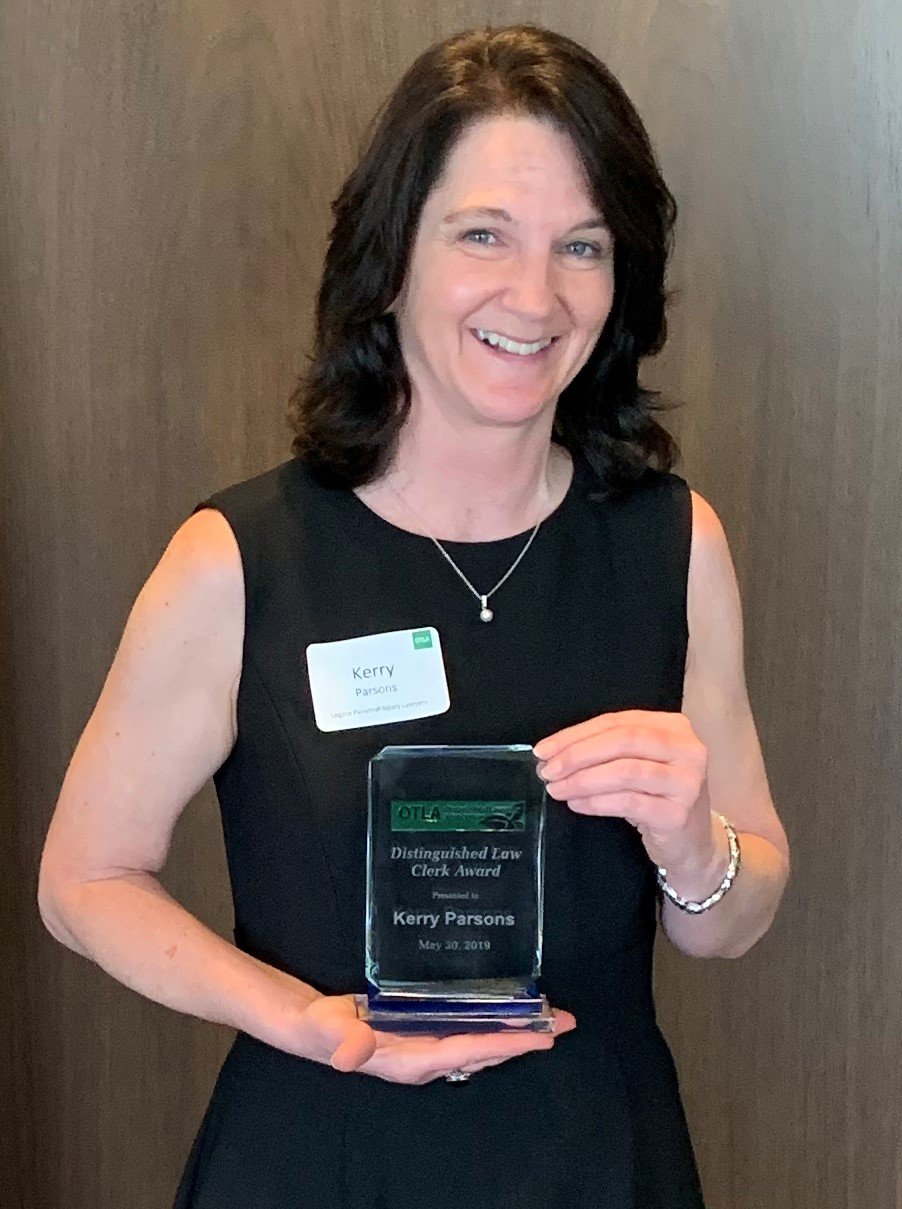 Kerry Parsons, Legate Personal Injury Lawyers
Kerry Parsons has been an OTLA member for 15 years and despite her reticence to speak publicly, she has presented at OTLA conferences. She has developed forms and checklists that have become standards in the industry, content to let the lawyers who use them take the credit for their creation. Barb Legate blushes when she hears that legal colleagues love her check lists – because she knows that they were created in collaboration with Kerry!

Kerry works with other OTLA clerks at Legate Personal Injury Lawyers, and is the first one to share her experience with them. She has mentored clerks who have gone on to excel in their own careers and in turn have presented to colleagues at OTLA. Her patience with new clerks and ability to mentor clerks to senior positions speaks volumes about her character and the respect that her work mates and lawyers have for her.

The Outstanding Law Clerk Award will be awarded to the OTLA law clerk who has demonstrated exceptional commitment and proficiency to the OTLA Law Clerk Section, or contributed in a significant way to cases over the past year. The successful candidate will have displayed generosity with their time and contributions in their assistance to their fellow law clerks, and/or to their law offices, and has shown a dedication to those for whom we advocate. 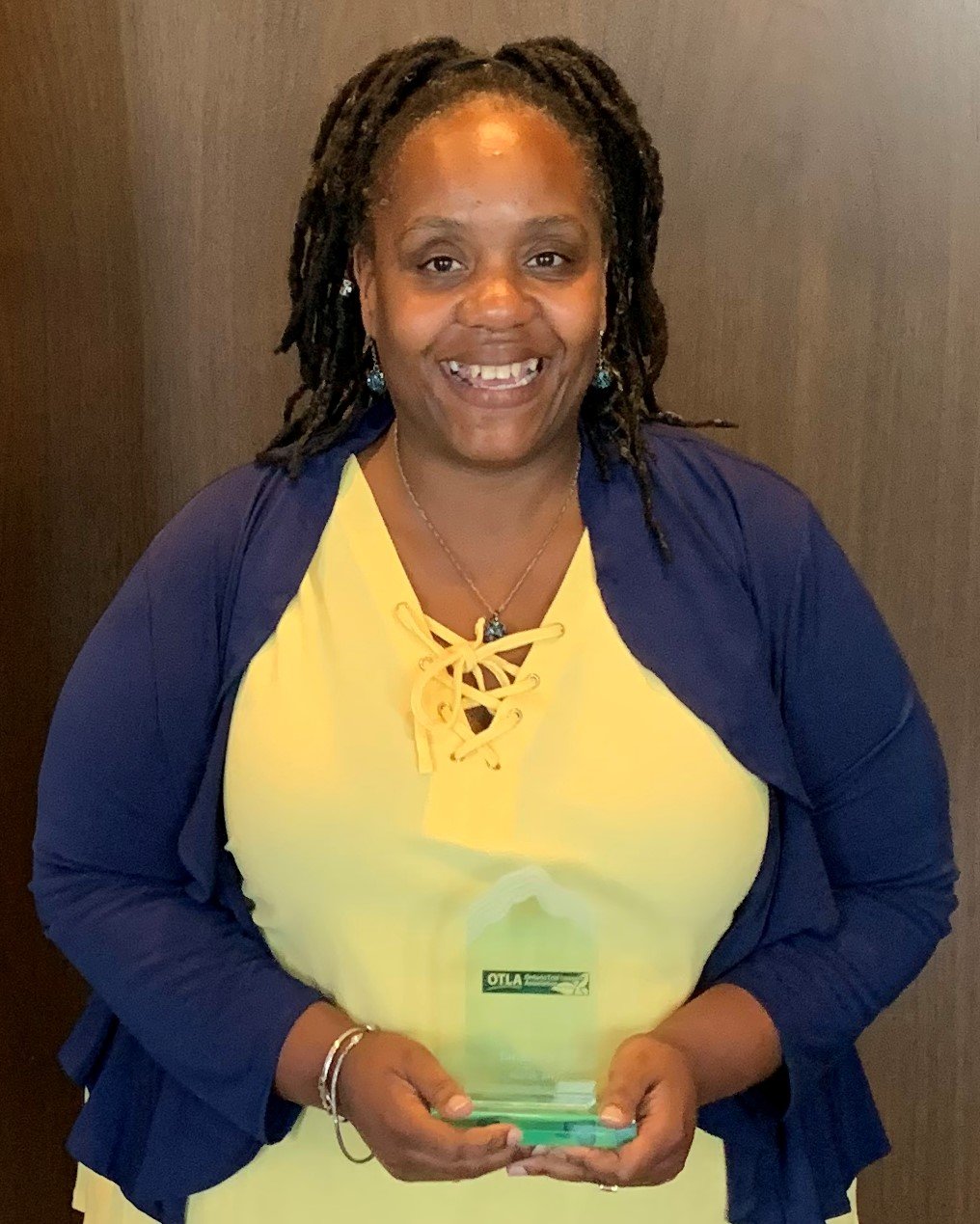 She is especially committed to educating and helping other law clerks, as demonstrated by her involvement in the Law Clerk Education Committee and as Vice-Chair of the Law Clerks Section.

She has been involved developing and presenting at conferences, webinars and roundtables geared to OTLA Law Clerks.

She is regularly communicating with other clerks by phone and email to provide advice about file issues, client management, technical SABS issues, trial preparation, and according to Adam Wagman her specialty -  adjuster stick handling.

Tania inspires others by also being well known for her community contributions. She is a Board member of Brain Smart Hamilton, working in the area to prevent and address concussions in youth sports. Tania is a respected colleague at Howie, Sack & Henry and is a true inspiration to all with whom she works at the law firm, OTLA and in the community.

Celebration of the Personal Injury Bar

The Ontario Trial Lawyers Association recognizes leaders of the plaintiff and defence personal injury bar at its Celebration of the Personal Injury Bar. Recipients have included: