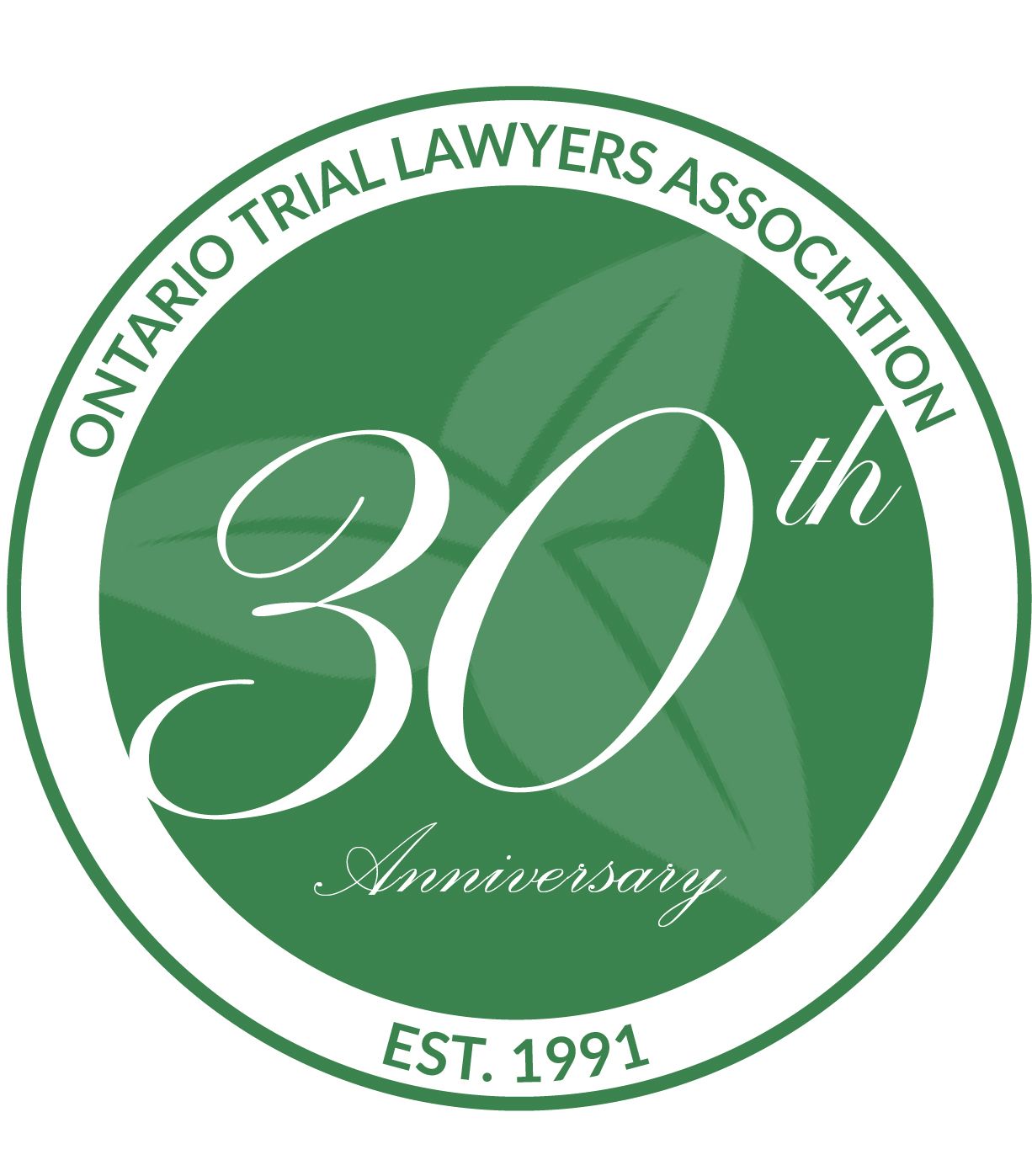 The H. Bruce T. Hillyer Award is awarded to an individual who exemplifies the spirit of OTLA in fearlessly advancing the cause of individual rights by the effective use of trial advocacy.

The John A. McLeish Award shall be awarded to the person, association or group which has made an outstanding contribution to the goals of a fair trial and access to justice, as an advocate, in legal scholarship, continuing legal education, legal writing, journalism, politics or government.

The group's contributions in taking on the insurance industry, as well as the provincial government, regarding the HST/SABS class action litigation is of immense importance to accident victims and to the legal profession. It is providing access to justice to thousands and thousands of victims who have been shortchanged for medical and rehabilitation benefits.

The litigation has already resulted in several insurance companies modifying practices for the public good. In the face of powerful adversaries, the team exhibited the courage needed to succeed and have inspired advocacy in others that will be needed to carry the day.

The Dean Edgell Award is awarded to a lawyer who has promoted the goals of OTLA through significant contribution and excellence in legal writing, continuing legal education, and leadership activities.

The Martin Wunder, Q.C. Outstanding New Lawyer Award is awarded to an OTLA member in recognition of exceptional commitment to and promotion of the advancement of OTLA’s Mission: To fearlessly champion through the pursuit of the highest standards of advocacy the cause of those who have suffered injury or injustice. Candidates must have practiced law for less than 10 years and be nominated by an OTLA Member in good standing. The successful recipient will have demonstrated participation in activities and programs to improve our legal system and its responsiveness to those for whom we advocate. The individual will have displayed professional proficiency, undertaken trials, service to the profession and service to the community.

The Distinguished Service Award shall be awarded for long standing dedicated service to furthering the goals and ideals of the Ontario Trial Lawyers Association. 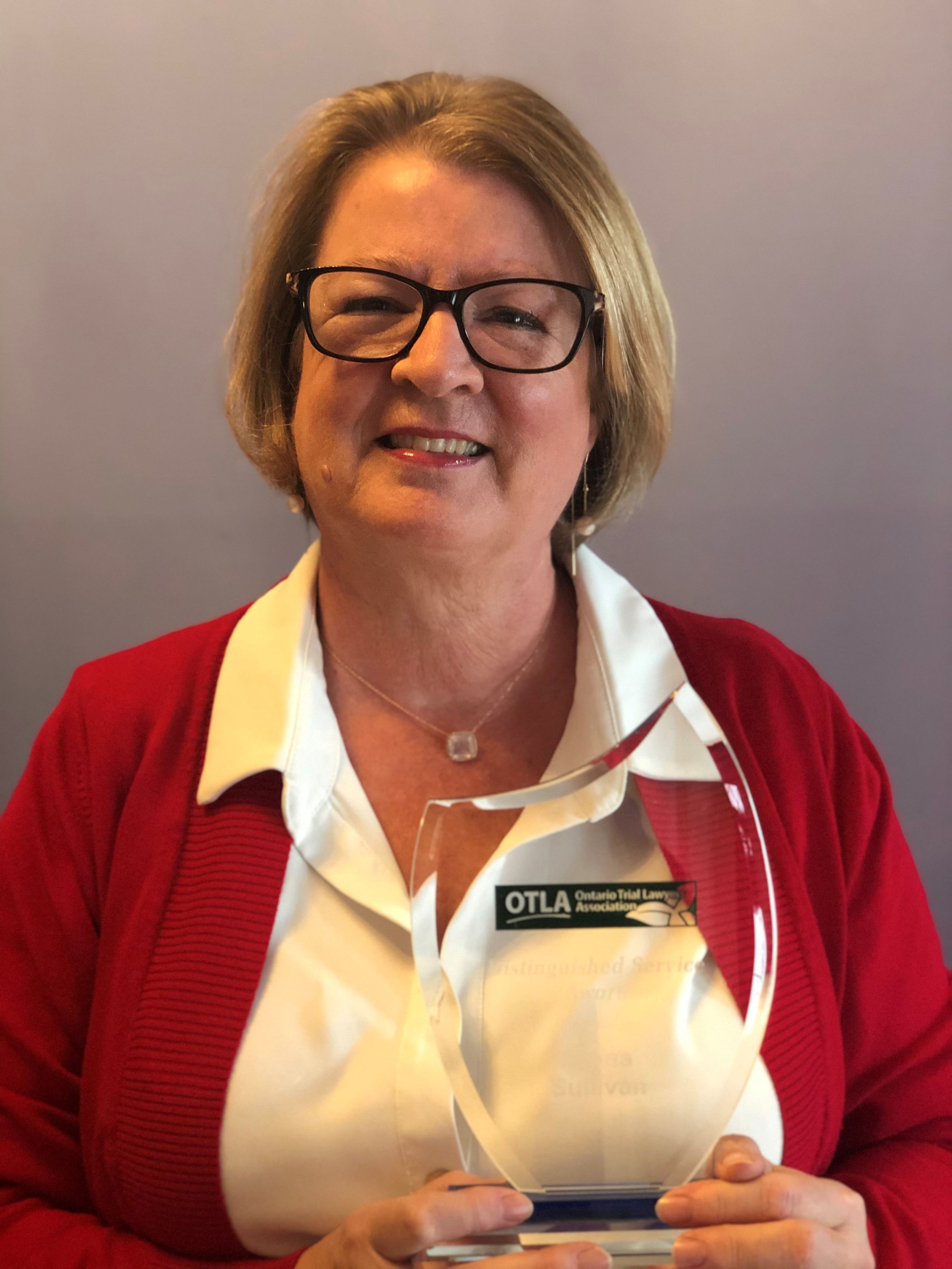 We value all our volunteers who give countless hours of their time and talents to help make us the best association we can be. We appreciate the hours Siona has spent as a Director, working on committees, Chairing and presenting at programs.

Siona selflessly gave her time and we thank her for her commitment to OTLA and her many years of involvement.

Congratulations, Siona, on receiving this award!

The Women’s Caucus Award is awarded to a female lawyer in OTLA who has demonstrated leadership in OTLA, promoted the retention and advancement of women in law, mentored other women and supported other female lawyers in OTLA. 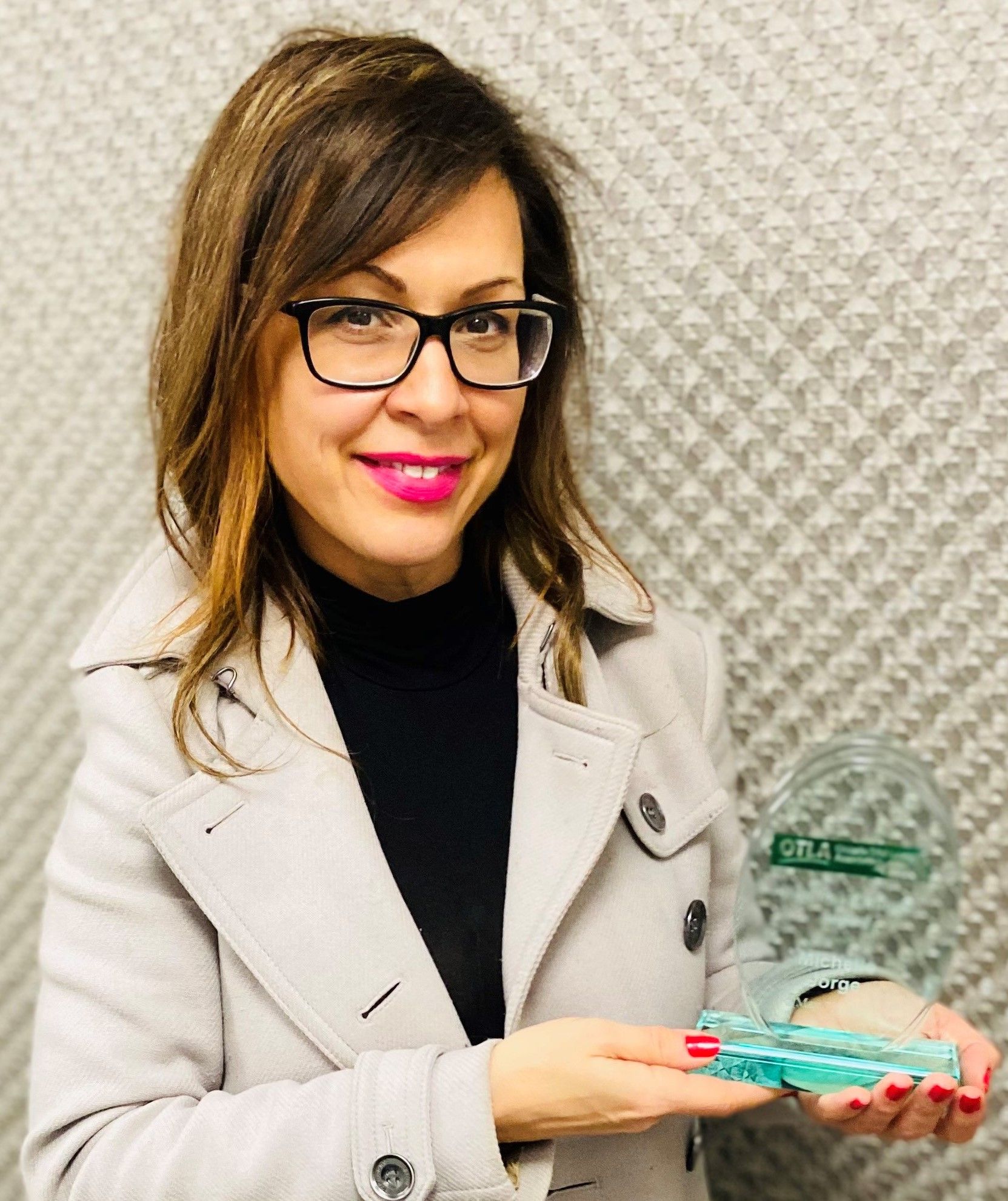 Michelle is being recognized for her as an OTLA Board member (2009-2017), her membership & involvement in OTLA’s Women Trial Lawyers Caucus Section, as well as her strong commitment to OTLA’s CLE programming including, conferences, webinars & roundtable discussions.

Michelle's leadership and willingness to share her expertise with other female lawyers in the profession has not gone unnoticed.

Congratulations, Michelle, on receiving this award!

The Distinguished Law Clerk Award shall be awarded to a senior law clerk, with at least 5 years membership in the OTLA Law Clerks Section, who has consistently exemplified the mission of the organization. 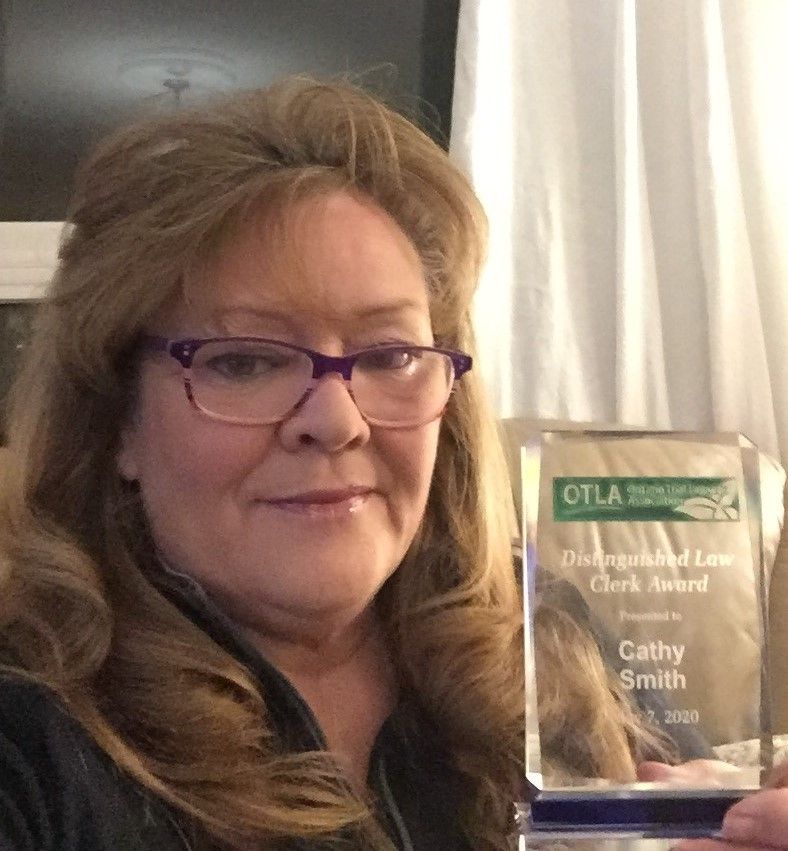 Exemplifying all that OTLA stands for. Cathy Smith is dedicated to the clients that Blackburn Lawyers represent and fearlessly champions their causes through exceptional support to senior counsel and offering insight in how to best represent the clients. Cathy has prepared and attended every trial with Ron Bohm for over 28 years!

Cathy has presented at OTLA Conferences and is active on the Listserve, assisting other legal colleagues with their questions and concerns.

Cathy has generously shared her time and expertise to help run focus groups and mock trials for other firms, as well as shared extensive precedents for their planning and execution, which are the result of an untold number of work hours. She is a mentor to several Law Clerks at Blackburn Lawyers and always makes time to teach and share her extensive knowledge.

Cathy's commitment to the lawyer with whom she works and the clients they represent is truly inspirational.
When trial time comes, Cathy can be counted upon to always be there side by side with Senior counsel, keeping them organized, contributing to topics of cross examination and even creating exhibits for demonstrative evidence during trials. 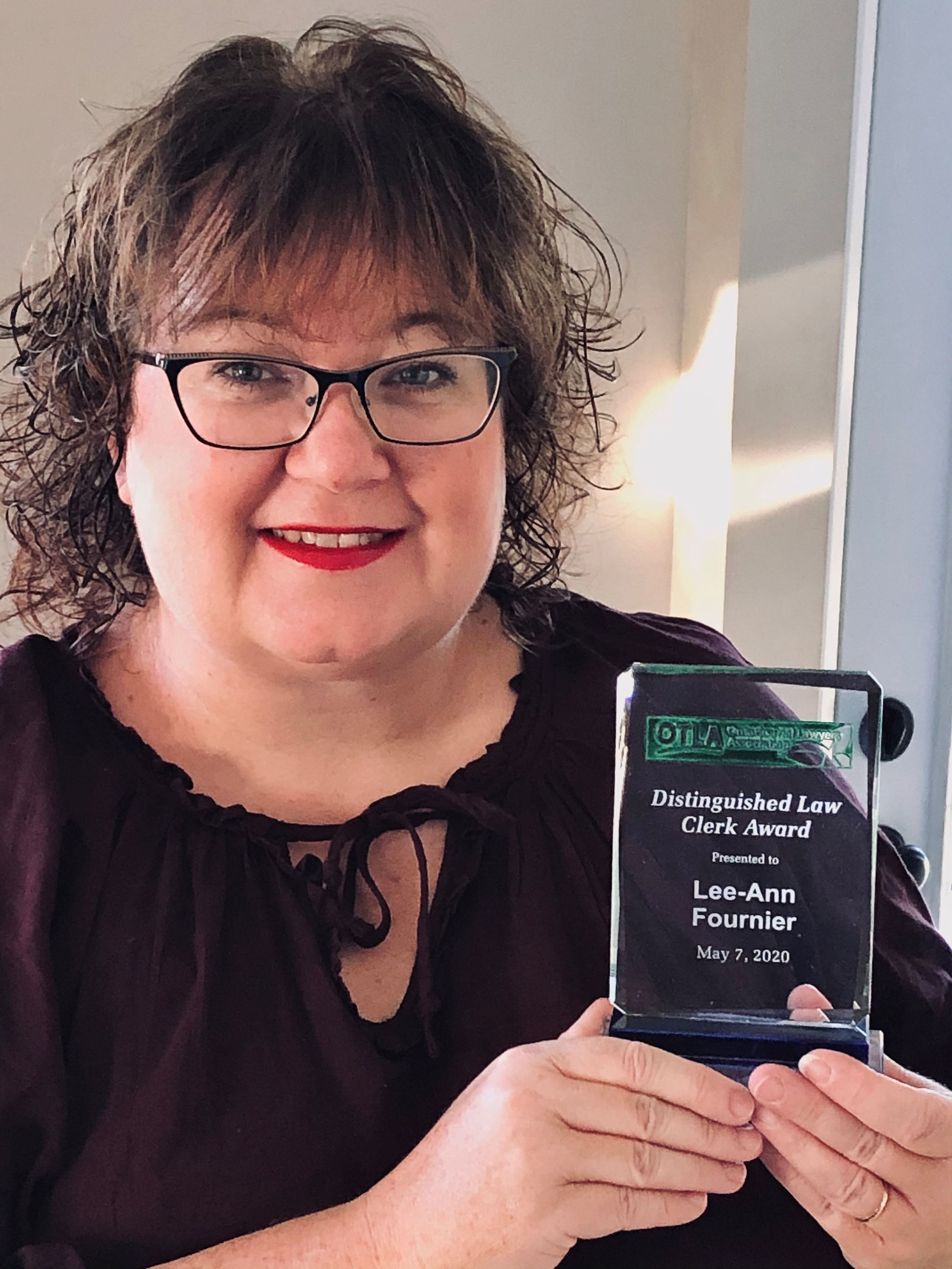 Lee-Anne is being recognized for her tireless support of OTLA, through her participation at conferences, contributing to conversations on the Listserve, as well as her mentorship of many young clerks.

Lee-Ann's involvement, during Steve Rastin‘s OTLA Board presidential year, as the primary law clerk working on the OTLA intervention in Tomec v. Economical.

As a trial clerk Lee-Ann contributed to precedent setting decisions that have promoted the interests of accident victims and injured especially with respect to Long Term disability and motor vehicle law. Lee-Ann has tremendous sympathy for her clients with whom she often develop a close and meaningful relationships by the end of their cases.

The Outstanding Law Clerk Award will be awarded to the OTLA law clerk who has demonstrated exceptional commitment and proficiency to the OTLA Law Clerk Section, or contributed in a significant way to cases over the past year. The successful candidate will have displayed generosity with their time and contributions in their assistance to their fellow law clerks, and/or to their law offices, and has shown a dedication to those for whom we advocate. 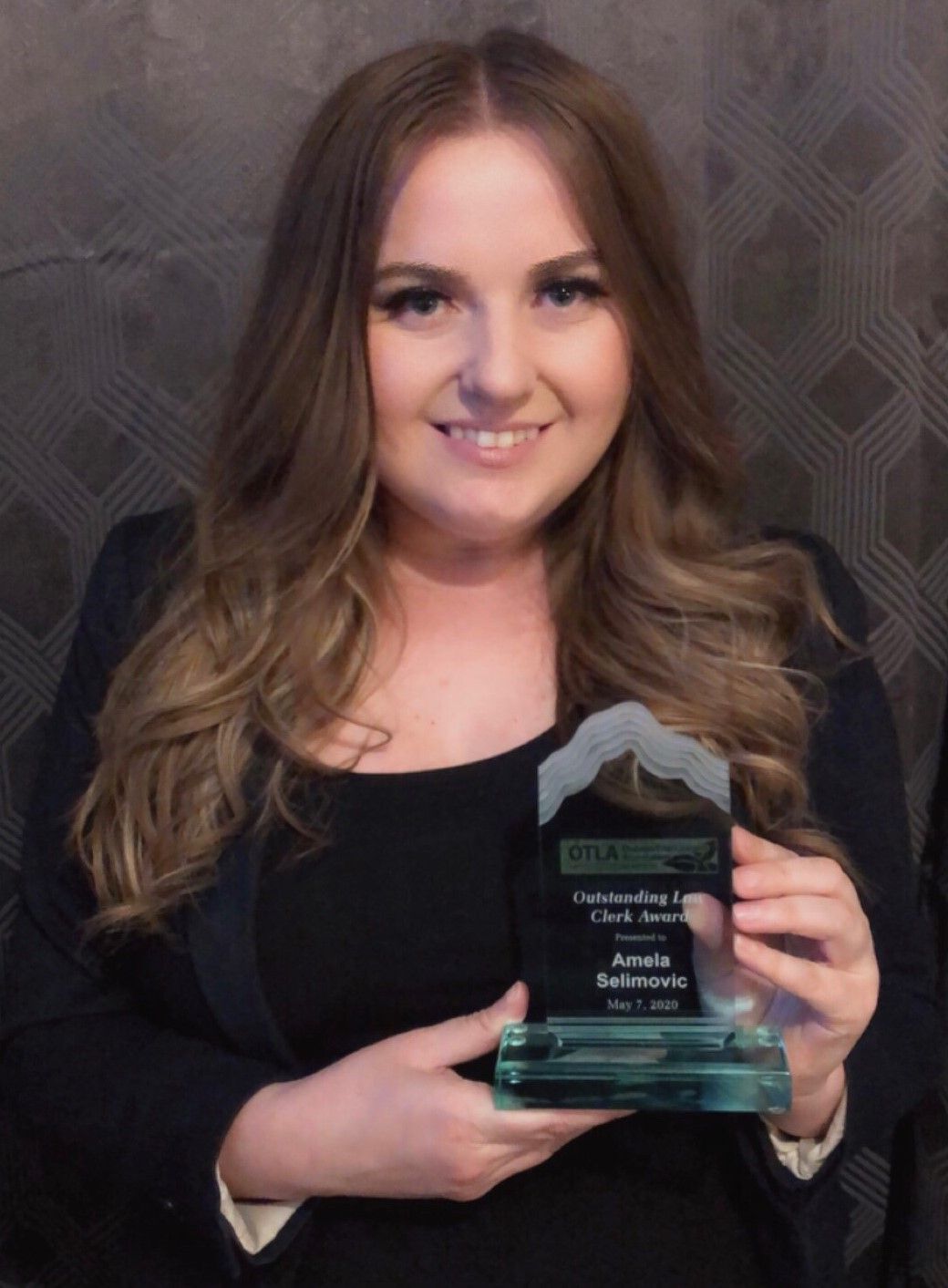 Amela's work as Chair and Vice-Chair of the Law Clerks section and her involvement in organizing various conferences and webinars with interesting topics is appreciated by her legal colleagues and OTLA.

She is always available to help others at work and answer questions or provide input on the OTLA Listserve.

Her enthusiasm, inspiration to others and dedication to the profession has been a shining example for others to follow.

Celebration of the Personal Injury Bar

The Ontario Trial Lawyers Association recognizes leaders of the plaintiff and defence personal injury bar at its Celebration of the Personal Injury Bar. Recipients have included: